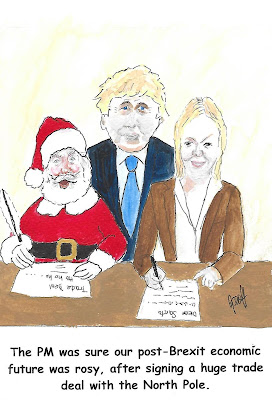 I’ve not done a lot of cartoons this year.  Partly I couldn’t be bothered – the lockdown blues often meant I just couldn’t be arsed to do very much at all. But more importantly, I really couldn’t find anything even remotely amusing about which to produce a cartoon.  Not for the first time I (and many others) have concluded that satire’s dead.

I usually conclude these posts by hoping that the next year would be better than the previous one.  That’s never worked, so last year I decided not to risk any wishes, lamely finishing ‘…let’s just keep fingers crossed that it’s not as bad as it might be’.  Well that went well.

It really is impossible to imagine a government as serially incompetent, as structurally mendacious, and as cynically corrupt as this lot.  The latest small example which took my breath away was Priti Awful claiming that the government had constantly been ahead of the curve in acting proactively in tackling the pandemic.  Such strategic brilliance has us top of the European league for Covid related deaths (and 4th on deaths per head of population), and one of the worst performing economies.  Just about every decision has been too late, each delay leading to more cases and deaths, and increased impact on the economy.  And of course there’s the nightmare that is Brexit, where the lack of preparation has been staggering.

So, at the start of December I thought – let’s cheer myself up by preparing the Christmas card, but in keeping with the spirit of 2020, everything started to go wrong.  First idea: Dominic Cummings in an opticians reading the eye-test poster now containing either a reference to or a Christmas message or both; then other versions of the same idea appear, after which Cummings gets sacked/pensioned off and the cartoon loses its topicality. Next: one of the Wise Men at the stable door telling the shepherd they can’t come in because of the rule of six: even better version appears in Private Eye, in which the Baby Jesus alone accounts for three people. Next: Wise men on a screen announcing they’ll just do the meeting by Zoom – same idea on a Private Eye Christmas card.  So, now an idea reflecting the confidence with which Our Great Leader and his team are approaching post-Brexit trade talks...

Which brings us of course to next year, and I’m making no wishes about it, of any kind.  Just try to have a Merry Christmas…

I've not posted about the lock-down yet - well there's still plenty of time, if you're over 70. But I thought I would celebrate the Bard's birthday with some reflections on subtly hidden meanings within the text that they never told us about at school.  And of course a lot of the plays were written during the Elizabethan equivalent of Covid-19... 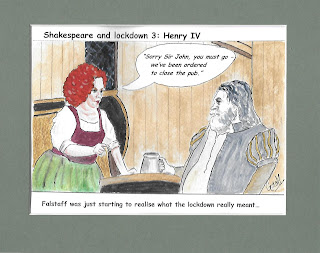 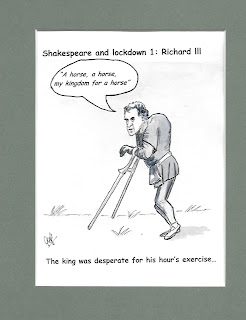 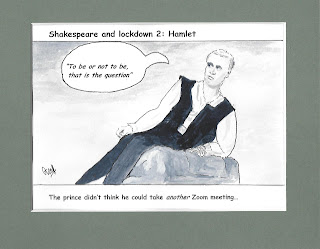 And the waters covered...

I've not posted a great deal about climate change; not because I don't care but it's not particularly funny.  OK neither is anything to do with BoJo but I've cartooned him just a few times.  Well last year I started work on a series of cartoons about climate change, and one of them was based on the old LNER poster advertising Skegness: 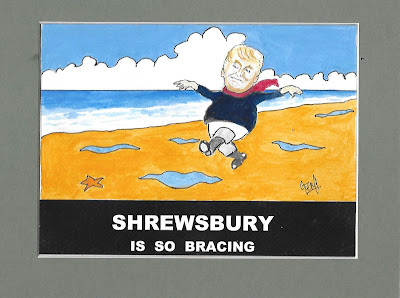 Of course this was deliberately exaggerated for the sake of emphasis; but then this week...: 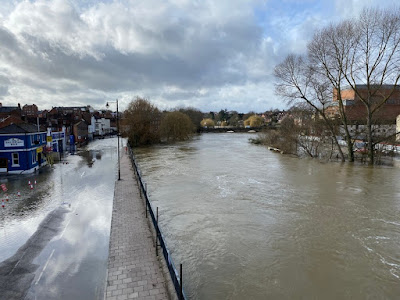 This was in Shrewsbury yesterday.  Well you can still see some buildings (and the sun's not shining and The Donald isn't dancing around, but maybe we're heading in the direction of the carton.  Yet I've heard a number of locals round Shropshire, on the news and people I've spoken to, who still say this is just standard, the Severn always flood, climate change is just a fantasy of environmentalists.   I'm at a loss to know how we can get people to take this seriously...

Yet another Christmas posting… 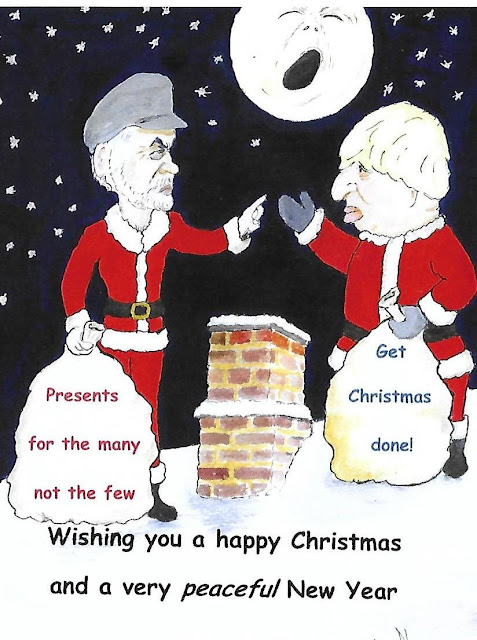 I’m writing this Christmas message rather earlier than previous years, but not because I’m becoming more efficient.  Far from it.  Had I left it – and the design of the cartoon accompanying it – till the usual date, it would have been after the election, and of course I'd have missed the Christmas post.  As it is, I write not knowing how it’s going to go.  Logic of a kind says we face the appalling prospect of five years of a hard right majority government (though who knows – his promised constitutional reviews may have banned elections in five years’ time).  Some polls are suggesting the gap is closing, and widespread talk of tactical voting may give me some reason to stay up beyond ten o’clock on election night.


But either way, this has been, without doubt, the least inspiring, most cynical, general election in my lifetime.   There really is little for anyone who is trying to be satirical to add to what has already been said, and that’s just by the politicians.   Some highlights (or should that be lowlights) for me include Nicky Morgan’s insistence that the fact that 19,000 of the “promised”  50,000 extra nurses are already in post and would be retained nevertheless meant there would still be an extra 50,000.  Then there’s Swinson’s apparently sincere conviction that she was a genuine candidate to be prime minister.  Or the mysterious, and entirely welcome, disappearance of Rees-Mogg. But, to be even-handed, there’s Corbyn’s insistence that he, alone in the country, watches the Queen’s Speech in the morning, before it’s been broadcast.  And while we’re on the subject, the bookies are offering odds on whether she mentions Prince Andrew: this year if she mentions an ‘anus horribilis’, we know who she’ll be referring to.

And I haven’t even referred to Johnson yet.  Self-evidently a narcissistic buffoon, there is actually nothing amusing about him.  His lying has reached Trumpian proportions, to the point where it actually ceases to be lying as we’ve always understood it, now resembling what POTUS’ press secretary called ‘alternative facts’.   And the same approach to evidence and facts affects those who support him (or some version of his cause), who dismiss anything they don’t like as ‘fake news’.  The social media universe was flooded with apparently evidenced reports that the dreadful picture of the boy on the floor in a hospital was an invention from Momentum.  Even McLuskey couldn’t stoop to that.

There are moments when I genuinely fear the consequences for this country if Johnson’s sorry crowd get a working majority.  I used to conclude these posts by hoping the next year would be better than the previous one, though last year I changed that, wishing next year even shittier, in the hope I’d be proved wrong.  Sadly I wasn’t so I’m not risking any wishes at all for next year: let’s just keep fingers crossed that it’s not as bad as it might be.

No gunpowder – but treason and plot? 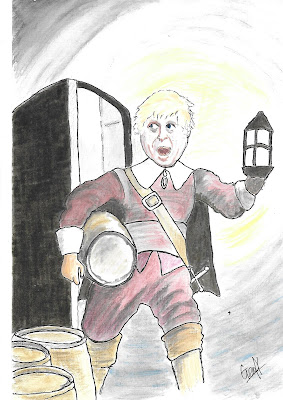 Johnson’s decision to silence parliament may be slightly more sophisticated than Guy Fawkes’ attempt.  But his attempt to constrain parliament’s ability to his government under review reflects his complete lack of legitimacy, as prime minister, and as champion of a no-deal Brexit. He presides over a minority government, support reduced by his hypocritical decision to remove the whip from his opponents. That he is only prime minister thanks to the votes of some 90,000 members of the Conservative Party hardly bestows great legitimacy.

He’s attacked those seeking to rule out a no-deal departure for thwarting democracy by preventing the fulfilment of the ‘will of the people’.  But even setting aside the imperfections of the referendum (excess expenditure, the interference by a foreign power, lies on the bus etc), its result does not really represent the ‘will of the people’ in the way he suggests.  It certainly provides no mandate for a no-deal departure: Gove, Farage, Fox and others spent the campaign telling us how easy it would be to leave the EU with a terrific trade deal in place.  But it’s worse than that: despite a reasonably high turnout (72%) only 37% voted to leave – meaning therefore that 63% didn’t.  At best, the referendum offered a snapshot of the views of 72% of the electorate over three and a half years ago: and it’s a very different electorate today.  Since then almost two million people have died, and more importantly almost 2.3 million young people have attained voting age.  These now form part of ‘the people’ whose ‘will’ needs to be respected.  But since the polls suggest that there’s a substantial majority of remain voters among this group, Johnson is of course reluctant to seek their views, or indeed the views of any who oppose his no-deal Brexit obsession.

He’s now belatedly pursuing an election as the only feasible way to secure his no-deal departure.  Meanwhile he and his government continue to show contempt for parliament through the action to prorogue, contempt symbolically demonstrated by the arrogance of Rees Smug during the recent debate, arrogance of which I’m sure Nanny would have disapproved.