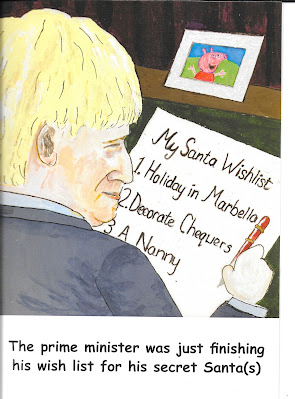 I’ve not felt like posting anything this year – not since last year’s half-arsed Christmas card.  There’s a combination of reasons.  First, as I’ve had occasion to say before, there comes a point when what’s going on is beyond satire.  The nonsense about parties/business meetings is a case in point.

But the second reason is more significant.  This government is so incredibly appalling that I’ve found it impossible to say anything even remotely amusing about anything they’ve done.   Incompetent, dishonest, corrupt, uncaring, heartless, self-centred…I probably could go on.  And what’s made it worse is the fact that until very recently, despite all the above, they’ve remained ahead in the polls, and the news programmes still manage to find people prepared to say ‘Boris is awful but we still love him.’

I could just about face a cartoon about his personal nest-feathering for this year’s card but that’s about all.  (Actually, after I’d done this one, I thought of a better: Bojo and Carrie in their drawing room admiring their gold wall-paper, with the caption: “Deck the walls with others’ lolly”).

Ah well.  Do we dare to hope that next year might not be quite as fucking awful as the last couple?