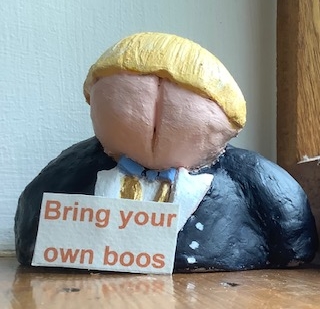 I was thinking of this before Brady announced the no confidence vote, but, perhaps surprisingly, not because of the countless crimes and misdemeanours that have – at last – led up to it, but because of my relationship with Boris Johnson.  I should clarify that perhaps: I am of course delighted that I have never met the man, let alone had a real relationship with him; I was just talking about our (virtual?) relationship, with me as cartoonist and him as subject.  It’s a relationship that has been going on for as long as I’ve attempted to follow in the footsteps of the greats, like Gilray, Low, Bell, Rowson et al.  And my thoughts about that relationship were triggered by the thought that it could, very shortly be coming to an end. So, perhaps my first attempt at clay model cartooning could also be my last attempt at Johnson, or at least Steve Bell’s arse-face version.

Of course, the real me says ‘bring it on’: like many others, I’m running out of the words needed to describe the range of inadequacy, dishonesty and incompetence he has displayed in his time in Number 10.  But I also have to admit that the cartoonist in me has benefited hugely from his serial fuck-ups, and perhaps even more so, from the sheer arrogance of the man – partly inherited from his father, partly confirmed and developed by his education at Eton, where the only subject in the school syllabus is Entitlement.

I may have forgotten some, but the cartoons I remember include a very early effort entitled Downton Cabbie, (with a slightly rearranged Latin motto on the cab: vidi, vici, veni); another of Johnson threatening to destroy parliament in the manner of Guy Fawkes during the proroguing scandal, and a third, in which a map of the UK shows Scotland covered with Johnson’s head while the Isle of Wight craps all over France, derived from a Gilray, produced during the Anglo-French wars of the late 18th and early 19th centuries. And of course, he has featured in four of my six Christmas cards.

So, will our cartoonist-subject relationship be at an end: will tonight’s vote terminate the Boris years?  And is it likely that a former Prime Minister might get up to anything worthy of a satirical cartoon?  Well, since it is Johnson we’re talking about, I think the answers to these two questions are: 1) probably not, and 2), quite likely.

On the first, there’s no doubt the succession of recent revelations, including over the Jubilee weekend the booing and the irony of the lesson given to Johnson to read – intensified no doubt through Tory MPs meetings with their constituents over the weekend – have increased the size of Brady’s post bag.  But there are plenty of reasons for Tory MPs to hold back from inserting the metaphoric knife – not least the absence of any potential successor remotely worthy of the post of Prime Minister.  So my prediction: he’ll survive this one (and if he doesn’t I’ll be back tomorrow to reverse the prediction).  And the second question – what will he get up to after his term finally comes to an end and will it be cartoon-worthy? Well, as the saying goes, you can’t keep a good man down; and while that isn’t relevant here, the same sentiment applies to bad pennies.

with thanks to Auntie Margaret for the 'boos' gag