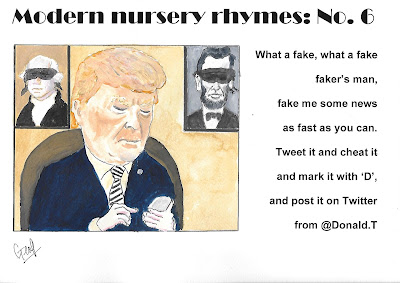 It’s not often SIC has quoted biblical sources, or indulged in Latin epithets.  For those whose Latin is a bit rusty, the phrase means ‘what is truth’, which is what the Bible claims Pilate said to Jesus – and, as Bacon put it – didn’t wait for an answer.  It’s prompted a whole range of philosophical explorations, which suggest that identifying the truth isn’t necessarily straightforward.

I don’t think it’s being unduly harsh on the 45th President of the if I suggest his allegations about fake news don’t always carry the intellectual weight of these philosophical debates about truth.  According to CNN (who of course you can’t believe anyway) Donald Trump has – sort of – claimed to have invented the term: "The media is really, the word, one of the greatest of all terms I've come up with, is 'fake.'"  I say ‘sort of’ because penetrating the POTUS distinctive linguistic style is rarely straightforward.  However, what is true is that he didn’t originate the phrase – I’ve come across usages in the North American press in the late 19th century, for example:

Trump celebrated the anniversary of his inauguration with an announcement of his ‘Fake News’ awards – 11 headlines which over the course of the year he had dubbed fake.  One was a forecast, another an unpublished tweet, and most were rapidly corrected where they were genuinely wrong.  The 11th was RUSSIA COLLUSION (POTUS does love caps) described as ‘the greatest hoax perpetrated on the American people. THERE IS NO COLLUSION!’  Well, maybe but the (grand) jury is still out on that one.

Of course Trump himself has been known to post the occasional porkie – more than 2,000 in his first year of office, according to The Post.  Some are trivial – for example his proclamation that the crowd at his inauguration was the largest ever; others less so, such as his continued claims about Obama’s birthplace, or the   allegations about rigged elections and voter fraud.

Some of the stories in the fake news awards are simply untrue; but Trump’s use of the phrase goes far beyond this.  His overall condemnation not just of individual stories but of most (if not all) the institutions of the major mainstream news media suggests that for Trump, there are simply competing realities.  This was hinted at early on in his presidency when Kellyanne Conway referred to ‘alternative facts’, and said Donald Trump ‘doesn’t think he’s lying.’    But, and this is the real problem, there are millions of other Americans out there who subscribe to the same competing reality – and for whom there is no amount of evidence-based correction that can undermine what the Trumpster says.  Of course the problem isn’t restricted to the US – although the Guardian reported recently that trust in social media is eroding, there are still many for whom a shared post on Facebook automatically gets stored in the true and trusted file.  And this creates huge opportunities for organisations like Cambridge  Analytica – not to mention Putin’s elves:  more about that next time.