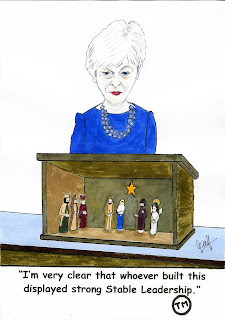 The Brexit fiasco stumbles on, with the utter incompetence of the government never ceasing to amaze.  I can’t believe that May doesn’t actually realise how hopeless her performance is, but her bland assertions about things going well, and ‘we’re on track for a settlement that’s in everyone’s interests’ suggests that’s what she actually believes.  Then of course there’s Trump, Kim Jong, the far right getting into positions of power in , and signs of an alliance that’s bringing Le Pen, Geert Wilders, Strache and Farage together.  Oh joy…


Some of you will have seen this already in card form – and if you haven’t it’s probably because it’s still held up in the post.  Or perhaps it’s because we haven’t sent you one.

We still have a few left, and the big question is: will they still be of any use next year?   I think they will, if only because the alternatives on offer make May seem an attractive proposition. We’ll see – I have been wrong before.  Meanwhile I will conclude with the same wish as last year: let 2018 at least offer some signs of hope.