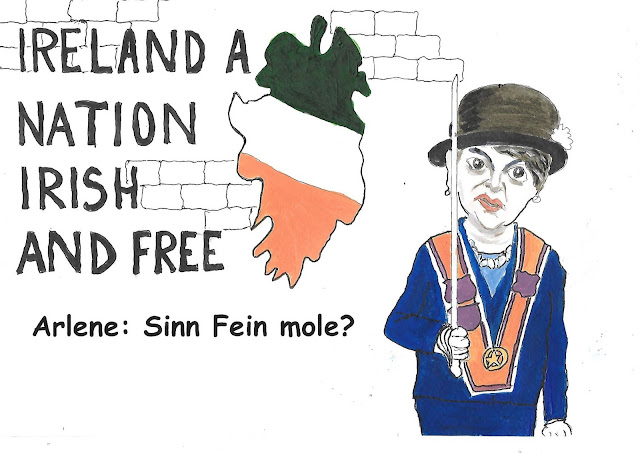 OK so this post was supposed to have gone up on St Patrick's day, but better late than never...

According to this morning’s paper, the ten sectarian throwbacks who make up the Parliamentary DUP are trying to decide whether to reverse their previous concerns about the effect of the backstop on and support May’s Brexit deal.  Ever since, in the wake of May’s unnecessary – and from her point of view, disastrous – decision to call a General Election in 2017, the less than magnificent ten have shored up her government, and together with the Raving Loony Rees-Moggsters, have wielded a veto over the whole Brexit process.  This was in return for a bribe from May (to the tune of £1bn), which, in the existentially cynical world of politics ranks up there among the most cynical.

We have heard a lot recently about the damage a second referendum would do; the Prime Minister said recently that it would ‘…damage social cohesion by undermining faith in our democracy.’    What about the threat to democracy the DUP’s privileged position in the power structure represents, given its status as a beacon of representative government?  Improbably, it’s no exaggeration to say that the future of this country is in the hands of these ten people (along with other Brexiteer ultras in the Provisional Wing of the Tory party), which is deeply disturbing when you examine the democratic credentials they bring to the debate.

In the 2017 General Election, the ten amassed between them approximately 296,000 votes – which represents about 0.6% of the British electorate.  The first-past-the post system brought them their ten seats (out of a total of 18), with just 36% of the vote.  Never mind that they count for less than 1% of the electorate, they don’t represent the views of on either.  The DUP are of course hard core Brexiteers; but in the referendum, the people of voted 56%-44% to remain.  In their ‘negotiations’ with May, they really speak for no-one. Respect the will of the people – but not in evidently.

The prospect of a no-deal Brexit has led to concerns about the possibility of a return to the Troubles, and a threat to the Good Friday agreement.    It’s not yet clear if the recent spate of bombs received in the UK and apparently sent from the ‘IRA’  actually represent some first steps towards a recurrence of the Troubles.

But quite separately from that, a number of observers, on both sides of the (currently soft) Irish border, have speculated that a no-deal Brexit could lead, ultimately, to a United Ireland, firmly in the EU.  What a spectacular irony that would be – if Arlene Foster’s hard-line tactics led to the realisation of her worst nightmare!