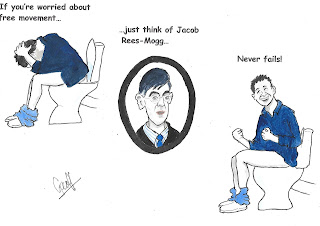 Latin epithets seem to have become the norm on SIC – two in a year.  But then there is no shortage of those around us who insist on harking back to what they argue was a happier past.  And prominent among them is Jacob Rees-Mogg.   He’s often portrayed as a figure of fun, which admittedly is very easy to do – the Member for the 18th century (though an earlier pre-Reformation century might be more appropriate), pictured as a 10 year-old reading the FT, openly affectionate about his Nanny.

Yet, underneath the self-satirising image there lurks a dangerous force in British politics.  His selective grasp of theology is well-publicised – opponent on religious grounds of abortion under any circumstance (even after rape) and gay marriage, but apparently unconcerned about the First Beatitude (blessed are the poor).  He has consistently voted at every opportunity for reductions in welfare benefits, and for stricter enforcement of immigration rules – including supporting a tighter asylum regime.  He’s generally opposed any increase in taxation rates for the better off.

Of course just now he’s best known for his obsessive support for Brexit and his role as chair of the self-styled European Research Group (European Myths Group might be more accurate).  What the ERG and other shady right wing fringe groups (such as the Institute for Economic Affairs, and the inappropriately named Tax Payers Alliance) are really after isn’t just 'taking back control' for its own sake, but as a step towards destroying all the employment, consumer and other protections that membership of the EU provides.  And beyond that, some of their member share close ties to the healthcare market, and see Brexit as a route to replacing he NHS with an American two tier system (great if you can afford the fees, non existent if you can’t).  As Polly Toynbee revealed recently (Hard right brexit) Raab, the recently departed Brexit secretary (who couldn’t support the treaty he negotiated) published a number of papers proposing an extreme right-wing policy agenda, including radical reductions in the number of government departments, welfare cuts, reduced employment protection, and an end of equalities legislation.

So yes, if you have trouble with free movement, do think of Rees-Mogg – he makes me shit anyway.

* How do you satirise Jacob Rees-Mogg?