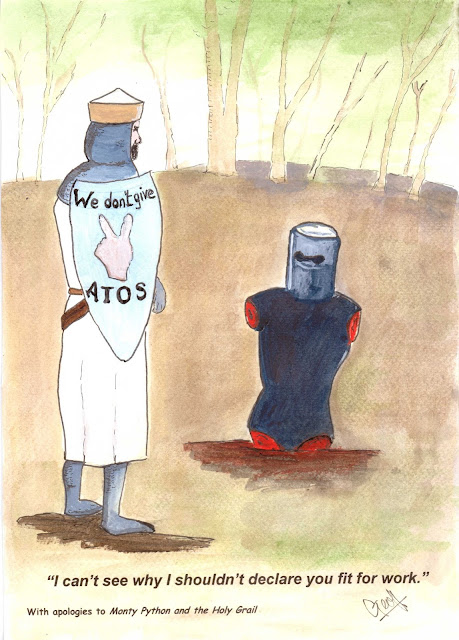 Update: There's a YouTube film of one man's account of his ATOS interview:
https://www.youtube.com/watch?feature=player_embedded&v=tG9a22hbrcY# …! #atos #wowpetition Watch it and hunt out the petitions being launched by change.org, 38 degrees, and on government sites

From April this year, a new benefit called Personal Independence Payment (PIP) will replace Disability Living Allowance (DLA) for disabled people aged 16 to 64.  For those already receiving DLA the new benefit will be phased in, but new claimants will have to make apply, triggering a process that will mean, according to a government website, that most people will have to ‘…attend a face-to-face consultation with a health professional as part of the claim.’   And the health professionals will be supplied by Atos, as part of a £400m contract awarded to the French company by the Department for Work and Pensions lat year.

Apart from their sterling role as sponsors of the Paralympics (another reminder of the death of satire – a phrase first coined in 1973 by Tom Lehrer when Henry Kissinger was awarded the Nobel Peace Prize), Atos are currently responsible for conducting the now notorious Work Capability Assessments (WCA).  These are the tests applied to determine whether those applying for (or indeed in receipt of) sickness benefit are actually fit for work.

The tests, which were launched in April 2011, were designed to make sure that no-one who was genuinely fit for work should receive sickness benefit.  In the first year of operation almost 40% ‘failed’ the test and were denied sickness benefit.  However,   a recent House of Commons research paper (The Work Capability Assessment for Employment and Support Allowance) confirmed that on appeal almost 40% of these assessments have been overturned.   In other words almost 40% of the assessments made by Atos health ‘professionals’ have been wrong. Successful appeals – overturning the original assessment – have hovered just below 40% ever since the start – and despite a series of independent reports with numerous recommendations for improvements. However, where claimants were represented by support organisations like CAB the figure rose to 80%.

PS. A recent survey of CABs showed that at least a third had had their funding from local authorities reduced as a result of government cuts.  in consequence a number have already closed and others are under threat.